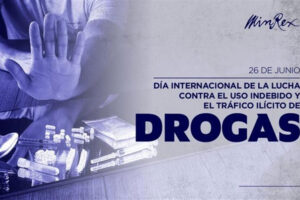 Havana, Cuba.- Cuba reiterated its zero tolerance policy on drugs on the International Day against Drug Abuse and Illicit Trafficking, on June 26.

A message from the Ministry of Foreign Affairs released on Twitter ratified the will of the Cuban State not to be a country of destination, transit or consumption of drugs.

Havana is a signatory to the main multilateral legal instruments approved by the United Nations, including 11 extradition treaties, 34 legal assistance treaties, 42 drug treaties and 31 treaties on the transfer of sanctioned persons with other countries.

Regarding its geographical position, Cuba is located between the United States, the world’s main consumer, and the Central American and Caribbean region, where several of the main drug producers and traffickers are located, which requires constant surveillance.

The Cuban strategy of drug confrontation and prevention is characterized by its multifactorial nature through the National Drug Commission, created in March 1989 and restructured in 1998 with broad interdisciplinary participation.