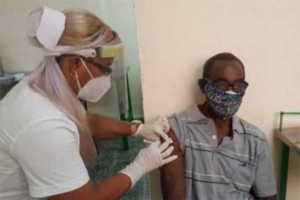 Havana, Cuba.- The health intervention in groups and territories at risk in Havana, with the anti-Covid-19 vaccine candidate Abdala, began Wednesday in four municipalities.

During the first two weeks of May through June, some 396 000 volunteers from San Miguel del Padrón, Habana del Este, Guanabacoa, and Regla will receive the three doses of the injectable.

According to data from the Ministry of Public Health, this will be followed by Boyeros, Cotorro, and Arroyo Naranjo, with 382,016 people in a process that will take place between the last week of May and July

Between May and June, health workers and students from all over the country who were not vaccinated in the intervention studies will receive the vaccine candidate, a total of 474,676.

In Ciego de Avila, the health intervention began in this population group, while Camagüey, Holguín, Artemisa, and Sancti Spíritus already have the necessary doses of Abdala.

Health Minister José Angel Portal recently explained the decision to conduct this health intervention temporarily until the Center for State Control of Medicines, Equipment and Medical Devices (CEDMED), Cuba’s regulatory authority, can issue the authorization for the massive use of Abdala and Soberana 02, the other candidate in Phase III of clinical trials.

The health authority assured that the research and development strategy of Cuban vaccines against Covid-19 had proven results in its different stages of studies, which is why this decision was taken to progress in the immunization of the population.

Dr. Portal explained that CEDMED’s authorization for the emergency use of these vaccines could be obtained by June. By August, it is expected to have immunized 70 percent of the Cuban population.

The health intervention in at-risk groups and territories will also be carried out in Santiago de Cuba, Matanzas, Pinar del Río, and the special municipality of the Isle of Youth scheduled between May and August.