Elections without compromise, without fraud, without demagoguery, without politics. No one had to aspire, because it was not the personal aspirations that determined the nomination of a candidate but the collective aspirations. 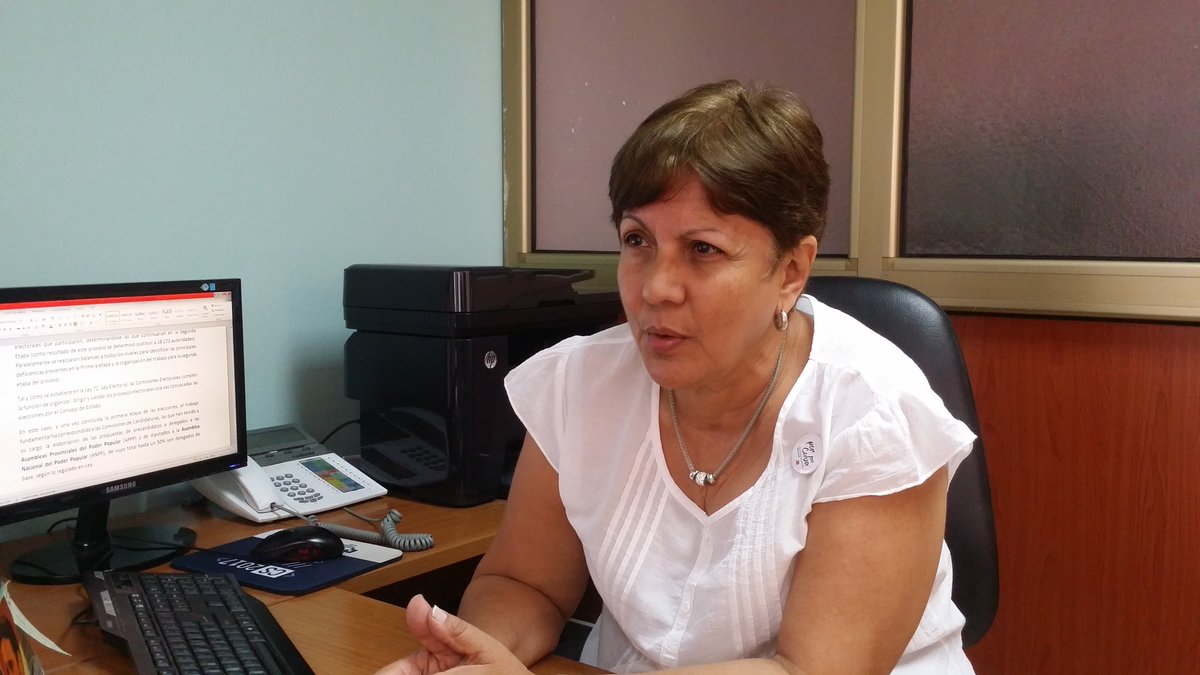 HAVANA, Cuba. – Elections without compromise, without fraud, without demagoguery, without politics. No one had to aspire, because it was not the personal aspirations that determined the nomination of a candidate but the collective aspirations.

These words from the historical leader of the Revolution, Fidel Castro, are mentioned by the Vocal of the National Electoral Commission, Marina Capo Ribalta, when talking about the general election process in Cuba, called last June by the Council of State, as established in the Constitution of the Republic and the Electoral Law number 72 of October 29, 1992.

“We work to guarantee on 11 March an election as Cuba deserves, with the quality and transparency that characterizes our electoral process”, Capo Ribalta said. To achieve this, more than 200 thousand electoral authorities at all levels (provincial, municipal, district, constituency and college) were trained on voters lists, inclusion model, reception work organization and computation of information, as well as the rest of the documents necessary for the day of the vote.

The official added that there are 24 470 electoral colleges to date, 141 of them are special (located in sites of massive flow of people, such as hospitals, terminals and other similar places). In this sense, explained that in this second stage, voters who demonstrate the inability to vote in the college corresponding to the place of residence may do so in any other, presenting the identity card or identification document of armed institutes.

She also insisted that the citizens review the voter lists, that will remain in public sites of the community until February 22, with the purpose of detecting any errors if any, and correcting it in time.

Capo Ribalta also pointed out that the exhibition of the biographies and photos of the candidates for deputies (605) and provincial delegates (1265) continues. The exchanges of the candidates with the people will continue until next March 10.

The official also highlighted the work of the Candidacy Commissions in this second stage of the general elections, in charge of the elaboration of the proposals of pre-candidates to deputies to the National Assembly of People’s Power and to delegates to the provincial government body. These proposals were presented and approved last January 21, in special session of the Municipal assemblies.

More than eight million Cubans are summoned to the polls on March 11th, in a vote of full and conscious democracy. To guarantee a successful day, of those that Cuba gives in each electoral process, the dynamic test is carried out with the purpose of checking the whole system of work planned for the day of the vote.

The Vocal of the National Electoral Commission, Marina Capo Ribalta, said that at the moment the organizational details are finalized. The dynamic test of March 4, a week before the elections, will allow to identify unsolved problems and work in their immediate solution, she said.

With this exercise, she added, the electoral means, mechanisms and structures are put into practice at all levels. That day electoral colleges will open at 7 a.m. and the electoral commissions of constituency, as well as other structures at the level of municipality, province and nation.

Capo Ribalta stressed the exercise includes the examination of the media, and the groups of reception, review and computation of information will be also activated. The week before the elections will be dedicated to correct, punctually at each site, the difficulties identified during the dynamic test.

She noted that on March 4 they will also check the Management and Information System of the Electoral Process in Cuba (SIGEL), designed and managed by a group of young people from the University of Information Science (UCI), which guarantees, in a timely and truthful way, the flow of information from the district, municipality, province and nation level. This system, the official said, supported technologically the past partial elections and the first stage of the 2017-2018 process.

A Look at the Electoral Schedule

Less than a month remains for the elections of which our deputies to Parliament, and the delegates to the provincial Assemblies of People’s Power will come, for a term of office of five years. Therefore, the member of the National Electoral Commission, Marina Capo Ribalta, dedicated a few minutes to explain how to exercise the right to vote on March 11.

Unlike the first stage of the process, when we voted by a single candidate, that is, the constituency delegate, now we voted by one, several or all candidates, she explained. Capo Ribalta also commented there will be two ballots: a green one to elect members of Parliament, and another white for provincial delegates. In the same way, she added, in the electoral colleges there will be will two ballot boxes, guarded by sudents, as does not happen in any other place in the world.

The official pointed out that, as established in Article 112 of the Electoral Law, the electoral table carries out the scrutiny, and it is public. The members of the electoral commissions of the territory, representatives of the political and mass organizations, candidates and other citizens can attend to the act.

Capo Ribalta recalled the most important steps ahead:

-General elections to elect deputies to the Parliament and delegates to the Provincial Assemblies of People’s Power (March 11, 2018).

-Constitution of the Provincial Assemblies of People’s Power
and election of its President and Vice- President (March 25, 2018).

-Constitution of the National Assembly of People’s Power and election of its President, Vice-President and Secretary- Election of the Council of State (April 19, 2018).