President Díaz-Canel will speak with people in Santiago de Cuba

President Díaz-Canel will speak with people in Santiago de Cuba 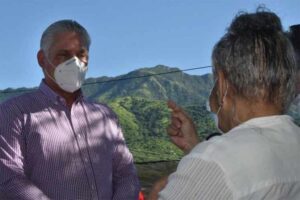 Santiago de Cuba, Cuba.- The first secretary of the Communist Party of Cuba (PCC) and President of the Republic, Miguel Díaz-Canel Bermúdez, will speak with people of Santiago in the coming days, as announced on his

The president, who took part in the Municipal Assembly of the PCC of the head demarcation of Santiago, affirmed in that social network that he will exchange with “that hardworking people” in what is known as the Cradle of the Revolution.

The tour that Díaz-Canel will carry out is inserted in those of the highest Cuban leadership throughout the national geography, in order to update the panorama of the main economic and social programs and those of compliance with the agreements of the 8th Party Congress.

One of the priorities in these meetings is to verify the promotion of constructive programs in communities in need of these benefits, in the midst of a strategy of participation and neighborhood commitment to these transformations.