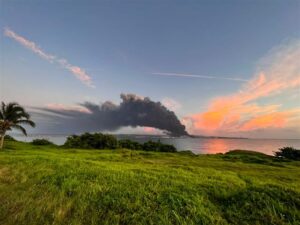 Havana, Cuba.- Cuban authorities and firefighters worked ardously over night trying as much as possible to contain the flames at the Matanzas supertanker terminal, after the collapse last night of a second fuel tank and the explosion of a third.

At dawn, helicopters of the Revolutionary Armed Forces worked loading water from the nearby bay of Matanzas and dropping it on the affected area to prevent the intense flames to spread.

The fire broke out last Friday, after an electrical discharge during a thunder storm hit tank 52 of that facility which contained some 25,000 cubic meters of crude oil.

On Saturday, the situation worsened when the fire spread to tank 51, which contained an even greater amount of diesel fuel and which at the stroke of midnight on Sunday collapsed and caused a violent explosion when the burning fuel spread over a vast area.

Cuban television broadcast images of the moment of the collapse and explosion of the fuel tank, which could not withstand the intense heat after burning for more than 30 hours, and it was feared that the fire could have hit a third tank, number 50, also full of crude oil.

Later, the Matanzas Provincial Defense Council informed that the third fuel tank did not collapse as a result of the explosion, although it did catch fire, and specified that after the oil spill from the second tank, intense and effective work is being carried out to control it.

As a result of the deflagration, three other people were hospitalized last night in Matanzas with minor burns, who have already been discharged, according to health authorities.

In the midst of this tragedy, Cubans have redoubled their spirit of human solidarity with those affected by the fire and especially with the families of the 16 people who are still missing.

International support was also quickly expressed with the arrival of specialized personnel and equipment from Mexico and Venezuela, in several flights that landed at the Juan Gualberto Gomez International Airport in Matanzas.