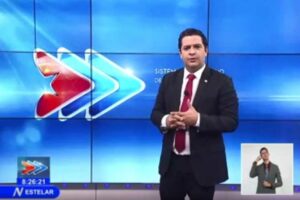 Havana, Cuba.- Cuban media have denounced new provocations aimed at undermining internal order as part of a US strategy to subvert the revolutionary process on the island.

National TV offered details of a show staged on Friday by a dozen people in the capital’s neighborhood of Old Havana under the pretext of going to the home of counterrevolutionary Luis Manuel Otero Alcantara.

The objective was to ask him to desist from the hunger strike he has allegedly been on for a week. They stage the sit-in close to a shop where people were lining to get it to present them as supporters the report explained.

According to the story, the leader of this action is antisocial individual with a long criminal record as he has been prosecuted for illicit economic activity, theft, misappropriation and robbery with violence against persons, among other crimes.

The report disclosed a telephone conversation in which a Cuban-American living in San Antonio, Texas, offers money to the participants in the event to guarantee the support of this type of actions.

It also denounced that Miami television stations manipulated this incident to present it as a demonstration of popular clamor and to accuse the authorities of violating civil rights.

Specialists and the media agree that the search for reactions inside and outside Cuba, the use of social networks to incite civil disobedience and the dissemination of false news are part of the script of the soft coup against the island.

The United States recently reported having spent more than $261 million on subversion projects against Cuba since 1990.