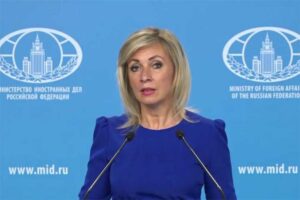 Moscow, Russia.- The Russian Ministry of Foreign Affairs has reiterated its rejection to the tightening of the policy the United States currently maintains against Cuba and its inclusion in the unilateral list of countries that do not cooperate in the fight against terrorism.

The decision was described as a new Washington’s hostile act towards the Caribbean nation, ‘a reflection of a politically motivated cynicism,’ Foreign Ministry spokeswoman Maria Zakharova said in statements offered on Thursday.

The diplomat reaffirmed Russia’s ‘categorical’ condemnation to any expression of sanctions that violate the United Nations Charter and international regulations.

On June 2, the Council of the Russian Federation (Senate) approved a statement condemning the United States blockade against the Caribbean nation and made a call for international solidarity in favor of Cuba.

The document demanded to put an end to the economic, commercial and financial siege imposed by Washington against Cuba for 60 years, Parliament’s official website informed.

The Council of the Russian Federation drew attention to the fact that 28 resolutions of the UN General Assembly about the necessity to put an end to the blockade of the United States against Cuba were adopted by the overwhelming majority of UN State members.

In the last few days, the State Duma (Lower House) submitted a draft declaration requesting the UN General Assembly and the parliaments of its country members to speak out against the US blockade.