The Democratic People’s Republic of Korea saw Cuban President Miguel Diaz-Canel off, with an impressive spectacle of massive popular gymnastics, the Arirang celebration. 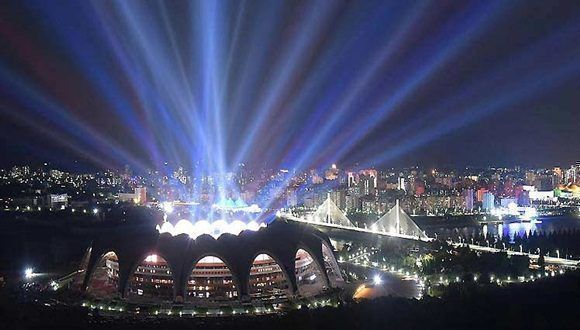 The magical and friendly enchantment captivated also the Korean leader Kim Jong Un, and illuminated one of the last nights of this autumn in Pyonyang.

The mythical and unique magic given to Diaz-Canel adds sports, acrobatics, music, theater, light drones, pyrotechnics, lights, a human slate, and political arguments presented in a pleasant way, all with precision of a digital screen programmed by cyber specialists.

A Historic and Original Celebration

In the farewell of the Cuban President in Pyongyang, the flags of Cuba and Democratic Korea, friendly texts, and other plastic actions allusive to both countries were presented by the robotics human slate.

The celebration lasted almost a hundred minutes and had an electrifying soundtrack that mixed traditional local and European music, and chained Cuban music, including La Guantanamera.

It also struck the Cuban delegation listening to the Anthem of the July 26th Movement or Liberty Anthem, as well as the orchestral arrangement of Carlos Faxas on a letter written by Agustin Diaz.

That theme resulted in the farewell of the tight but distinguished schedule prepared in Pyongyang for the Cuban President, who visited Democratic Korea since Sunday.