President of Cuba thanks for solidarity against US blockade

President of Cuba thanks for solidarity against US blockade 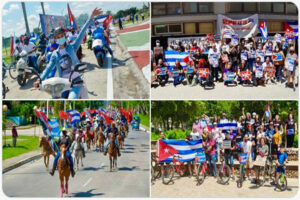 Havana, Cuba.- The President of Cuba Miguel Diaz Canel thanked those who demanded on Sunday the end of the US-imposed blockade against Cuba.

The head of State tweeted: ‘thanks to all who quit their Sunday rest and went out to the streets, either sunny or cold in distant cities to lay bridges of love and demand in all languages the end of a crime lasting too long.’

This weekend’s mobilizations in over seventy cities worldwide showed the rejection of Washington’s policy, as part of the third World Caravan against the blockade.

The main coordinator of the solidarity Project Bridges of Love, Carlos Lazo, convened another international initiative for next June 20th, three days before the vote at the UN General Assembly on Cuba’s draft resolution in rejection of the coercive measures of the White House.

According to Cuban authorities, the US hostility against Cuba cause in the order of 5,570 million dollars between April 2019 and March 2020, a record figure for a year, while the damage accumulated in over six decades amounts to 144,413 million dollars.

Etiquetas: President of Cuba thanks for solidarity against US blockade