Cuba warns at the UN about politicized agendas

Cuba warns at the UN about politicized agendas 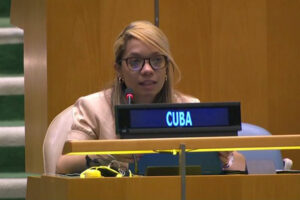 United Nations, United Nations.- Cuba warned at the UN how the promotion of the so-called responsibility to protect can be manipulated and used for political purposes to facilitate interference and agendas such as regime changes.

It can be also used to have tools for subversion in third countries, usually in small and developing nations, Pedro Luis Pedroso, Cuban permanent representative to the United Nations, said.

My country (Cuba) supports the efforts to prevent acts of genocide, war crimes and crimes against humanity, he stressed, while harping on being attentive to the use of terms that can be manipulated for political purposes, such is the case of the so-called ‘Responsibility to Protect’ as a principle, since it does not constitute a foundation or axiom of International Law, he stated.

In such an undemocratic international system, determining who decides when there is a need to protect, who determines that a State does not protect its population, who and under what criteria determines the avenues to act is crucial, he explained.

International efforts to prevent acts of genocide, war crimes, ethnic cleansing or crimes against humanity, an objective that Cuba has always shared, should contribute to strengthening the purposes and principles of the UN Charter, he stressed. In the same way, they must be in accordance with international law, in particular sovereign equality, territorial integrity and self-determination, Pedroso pointed out.

Over 15 years after the Millennium Summit, the question of the responsibility to protect continues to pose serious concerns for many countries, particularly for small and developing ones.

There are many ambiguities and contradictions in this concept, and therefore the pre-eminence of the principles of voluntariness, prior request and consent of the States in the context of the so-called ‘responsibility to protect must be recognized,’ Pedroso stressed.

‘If the intention is to prevent, then the root causes of these situations should be tackled down.’

Etiquetas: Cuba warns at the UN about politicized agendas