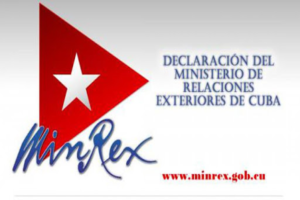 Havana, Cuba.- Cuba on Thursday ratified its willingness to continue contributing to the cooperation programs of the Association of Caribbean States (ACS), the Foreign Ministry reported on Twitter.

At the 26th Ordinary Meeting of the ACS Council of Ministers, which was held virtually, the Cuban delegation reaffirmed the commitment to collaborate on issues such as health, intra-regional transport, disaster risk reduction and addressing the effects of climate change.

On May 19, Cuba’s Foreign Minister Bruno Rodriguez highlighted the willingness to strengthen ties with ACS members in a telephone conversation with its Secretary General Rodolfo Sabonge.

On Twitter, the Cuban diplomat described the conversation as fraternal, where both representatives reviewed the group’s challenges and areas of cooperation.

Founded in 1994, the Association of Caribbean States is a regional organization that seeks to strengthen and integrate the countries of the area, with the purpose of creating a common economic space and promoting the sustainable development of its members.

Among other purposes, the ACS bolsters consultation, cooperation and concerted action among all the countries of the Caribbean region.

The organization is made up of 25 member States, including Cuba, and seven associate members.