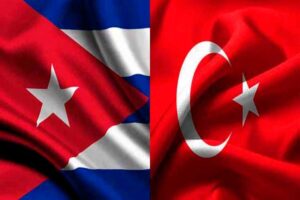 Ankara, Turkey.- The parliaments of Cuba and Turkey are expanding their ties on Monday, as a result of the official visit of a delegation from the Caribbean nation to this capital.

The Cuban delegation is headed by Deputy Speaker of the National Assembly of People’s Power Ana Maria Mari Machado, and is also composed of President of the International Relations Commission Yolanda Ferrer and official Zailin Gaulhiac.

The working agenda includes talks with parliamentary leaders and members of solidarity initiatives with Havana.

The links between the legislative bodies of Cuba and Turkey include cooperation and support in multilateral organizations that condemn the US blockade against the Cuban people.

In January of this year, Turkish Grand National Assembly Speaker Mustafa Sentop wrote in a letter that he hopes that the cooperation relations between the two parliaments would soon be strengthened with reciprocal inter-parliamentary visits.