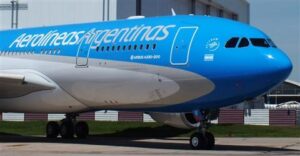 Buenos Aires, Argentina.- Aerolineas Argentinas restarts its flights to Cuba this Monday, after the operations to the Caribbean nation were suspended six years ago.

According to the company’s president, Pablo Ceriani, there will be three weekly flights between Buenos Aires and Havana, as it is a highly requested route by travel agencies and tour operators, both from this country and different parts of the region.

In declarations to Prensa Latina, Janet Ayala, Cuba’s Tourism adviser in Argentina, pointed out that this route is highly demanded because the main limitation to grow in the tourist issuing market to the Caribbean nation is air connectivity.

The demand for Cuba as a travel Destination is very high, especially during winter vacations. Our country has a high preference within the Caribbean, not only for its marvelous natural resources and majestic beaches, but also the combination of culture and heritage, Ayala said.

The resumption of Aerolineas Argentinas’ operations reinforces the deep bonds of friendship between our nations, as well as the commercial exchange. It also influences an economic improvement for Cuba, she stated.