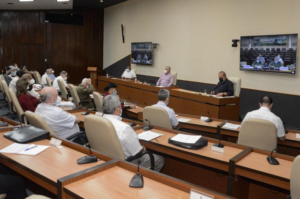 Havana, Cuba.- Studies developed by Cuban scientists confirmed that people vaccinated with the national anti-Covid-19 candidates show a low impact of the new strains detected in the country.

During a meeting with government authorities, Dr. Vicente Vérez, director of the Finlay Vaccine Institute, described as positive the analyses carried out with the so-called South African and Californian variants SARS-CoV-2 coronavirus, which causes Covid-19.

The preliminary results have been very positive. The impact that it has on the vaccinated is very low’, said Verez concerning the first variants’ tests.

Other studies on the so-called Californian also revealed a strong recognition of the strain, stressed the expert.

At the meeting, headed by President Miguel Díaz-Canel and Prime Minister Manuel Marrero, the specialists pointed out that there are four other genetic variants and nine mutational patterns in addition to the original strain circulating in the country, especially in the west.

In this regard, the dean of the Faculty of Mathematics and Computer Science of the University of Havana, Raul Guinovart, said that the growing trend of confirmed cases should continue in the coming weeks.

According to Pedro Mas, vice-president of the Cuban Society of Hygiene and Epidemiology, such behavior coincides with that of other nations that are making progress in the immunization of their population.

During the evaluation of the control of the Covid-19 pandemic by the governmental working group, the head of Cuban Public Health, José Ángel Portal, assured that immunization is progressing at a good pace with 26,102 people who received a dose the day before.

In the capital, the epicenter of the disease, four municipalities are carrying out a health intervention study with an accumulated immunization rate of more than 53 percent, he said.