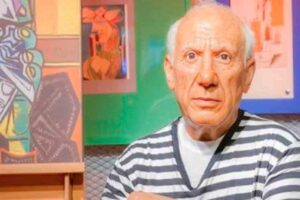 Havana, Cuba.- A selection of reproductions of pieces signed by Pablo Picasso evokes today the first exhibition of the Spanish painter in Cuba, which marked a milestone in the history of plastic arts in the island, eight decades ago.

Entitled 80th Anniversary of the First Exhibition of Pablo Picasso’s Works in Cuba and Latin America, the exhibition brings the paintings shown on that occasion closer through their reproductions with oil paintings and gouaches, while compiling archival materials that put that cultural event in context.

In that sense, images of clippings from the periodical press of the time, criticism and reviews stand out, as well as the invitation to the event, in which the writer Alejo Carpentier translates into French Picasso’s poem The Burial of the Count of Orgaz.

Installed in the Alejo Carpentier Library of the Casa de la Cultura de Plaza de la Revolución, in this capital, the initiative is the result of the research work developed by a group of specialists of the Foundation bearing the name of the author of El siglo de las luces (The Century of Enlightenment).