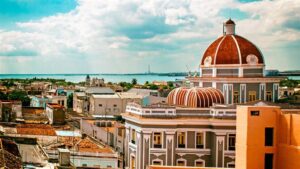 Cienfuegos, Cuba.- The drawing up of a macro project to be implemented with the French Development Agency (AFD, in French) has been the focus of the work by the Department of Territorial Integral Development of this Cuban province for two years.

In the framework of the celebration in this province of the national act for the Day of National Rebellioness on July 26, Jesus Rey Novoa, head of the Department, told Prensa Latina the scope of the ambitious project that will also be financed by the European Union (EU) and the French Embassy in Cuba.

The Sustainable Territorial and Tourist Development project of Cienfuegos includes actions in the eight municipalities of the demarcation, he said.

Its first major component focuses on the revitalization of the historic center of the city of Cienfuegos, declared Cultural Heritage of Humanity by UNESCO in 2005, he explained.

The second aspect includes three chains: the agricultural industry, the sustainable local tourism and the local production of construction materials, which consists of five initiatives, among them the recovery of the old roof tile factory in Simpatia.

That project includes the revitalization of the ceramic production and the assembly of a LC3 cement factory, which will use calcined clay mixed with clinker.

The financing of an innovation center known as the Scientific-Technological Park at the University of Cienfuegos, dedicated to digital transformation, is part of the area of governance and innovation.

The mega project, whose implementation is scheduled by 2023, is financed with 25 million euros in credits, among them 10 million (equivalent in Cuban pesos) provided by the French Embassy and seven million from the EU.