Nine months after the first visit to Villa Clara, the Council of Ministers returns to this central province, connected with the economic and social reality of the territory. 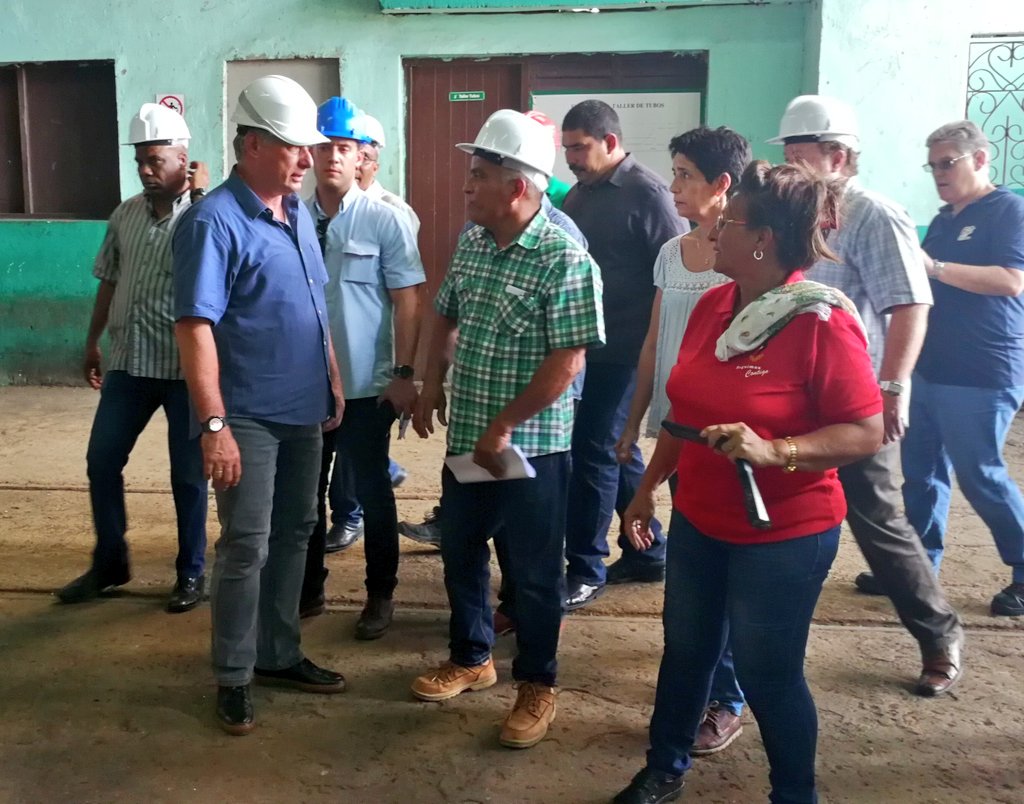 VILLA CLARA, Cuba.- Nine months after the first visit to Villa Clara, the Council of Ministers returns to this central province, connected with the economic and social reality of the territory.

In Sagua la Grande, a municipality about fifty kilometers from Santa Clara, began his route President Miguel Diaz-Canel Bermudez, very knowledgeable of the province where he was born and where he was a youth and Party leader during the hardest years of the Special Period.

The first point of the agenda was in the new Chlorine Sosa Plant, belonging to the Electrochemical Company of the territory. Unique of its kind in the country and with a technological conversion, the plant will produce caustic soda, hydrogen and chlorine gas intended in this first stage to the production of hypochlorite.

Once the parameters in the chlorine line are stabilized, the production of hydrochloric acid and liquid chlorine will start.

During the exchange with its executives, the Cuban President basked about the progress of the investor process, not exempt from irregularities, and insisted on issues such as planning and control.

Then, Diaz-Canel made a stop at Sagua Hotel and a few meters from there, in La Libertad Park, received the greeting of hundreds of people who expressed their sincere affection and sympathy.

The President delivered hugs, kisses and handshakes. As usual in his exchanges with the people, he explained the objectives of this visit:

For years, I did not come to Sagua and I see it more revived. We will continue doing things, and I´m very happy to be in this important and historic city, the Cuban President noted.

Next, Diaz-Canel visited the Business Unit of Repair of Railway Tanks, where he took interest in working conditions and productions, so important for the national economy.

Another point of the journey through Sagua municipality was Jesus Menendez Steam Boiler Company, unique of its kind in Cuba and essential for the assurance of sugar mills in the country.

However, the most emotional moment of the day occurred in the New Isabela community, where fifty Petrocasas were built for the families affected after the passage of Hurricane Irma in October 2017. There he explained to the neighbors why the Council of Ministers visits Villa Clara.

Diaz-Canel said that in this visit, we see things that progressed regarding what we did last August, and we see the new things to help the territory from the central government.

In addition, in the New Isabela community, President Diaz-Canel met Alejandro, a young person with disabilities who he talked to as if they were old friends. Alejandro told the President that they agreed on their tastes in music, confessed he wants to study Law and thanked the Revolution for the possibility of studying and dreaming.