Cuban President Miguel Diaz-Canel called at the Online Summit of the Non-Aligned Movement to defend life with solidarity and the commitment of all. 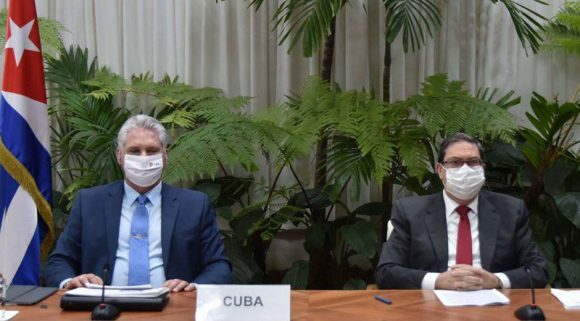 The Cuban President called for international cooperation to face pandemic.

HAVANA, Cuba.- Cuban President Miguel Diaz-Canel called at the Online Summit of the Non-Aligned Movement to defend life with solidarity and the commitment of all.

“Let us promote international cooperation and solidarity. Everyone’s efforts will be decisive. Let us do it for the right to health, peace and development of our peoples with strict adherence to the founding principles of the Let´s Do It for Life Movement,” Diaz-Canel remarked.

After asking to join wills and efforts in the immense challenge of confronting the pandemic, the Cuban President asserted that Cuba will not abandon its vocation of solidarity even if the United States government, for political reasons, continues to attack and hinder the international cooperation the island provides.

“Let´s say it honestly: if we had globalized solidarity as market was globalized, history would be another,” Diaz-Canel highlighted when speaking at the Non-Aligned Online Summit against Covid-19.

The Cuban President noted that the pandemic has demonstrated the fragility of a fractured and exclusionary world in which neither the most fortunate nor powerful could survive in the absence of those who create and sustain wealth with their work.

The pandemic exacerbates the pressing problems of a struggling planet in which 600 million people live in extreme poverty and where nearly half of the population has no access to basic health services, the Head of State pointed out.

Cuban President Miguel Diaz-Canel stated that the Non-Aligned Movement has demonstrated its relevance in the current situation, and in that regard quoted the communiqués of support for the World Health Organization and Covid-19, which promote global unity, solidarity and cooperation.

Diaz-Canel said the pandemic is a global challenge, which does not distinguish borders, ideologies or levels of development, hence that the answer must also be global and pooled, overcoming political differences.

Diaz-Canel said it is not possible to accurately predict the extent of the consequences of the pandemic, which shows a devastating impact on an increasingly interconnected world.

However, the world has not been able to enhance this interconnection in solidarity and today pays the price for its inability to correct serious social imbalances, the Cuban President highlighted.

“It is up to the Non-Aligned Countries to lead actions for the elimination of the unpayable external debt charged by our countries, and for the lifting of the coercive and unilateral measures to which some of us are subjected which, together with the socio-economic effects of Covid-19, threaten the sustainable development of peoples,” Diaz-Canel said.

The Cuban President called to confront selfishness and to be aware that aid from the industrialized North will be scarce, so he asked to share what you have, supporting each other and learning from successful experiences.

Diaz-Canel proposed to resume the annual meetings of Non-Aligned Health Ministers, within the framework of the World Health Assembly.

“Cuba is willing to share its experiences with the countries of the Movement, to which we are joined by historical bonds of friendship,” the Cuban President highlighted.

Diaz-Canel explained that months before the Covid-19 pandemic broke out, Cuba faced a brutal upsurge in America’s blocking policy, aimed at completely strangling its trade and access to fuels and currencies.

The Cuban President recalled that with enormous efforts and sacrifices, the island has managed to sustain a universal, free public health system, with established and highly qualified professionals, and recognized worldwide despite the rude and defamatory campaigns of discredit.

Diaz-Canel explained the measures taken by the Cuban government in the face of the onset of the disease, and in that regard referred to the plan of measures sustained by the country’s fundamental forces.

“Despite the restrictions imposed by the prolonged blockade, we have guaranteed the right to health of the Cuban people with the participation of the whole society,” Diaz-Canel said.

“I must report, for its seriousness, the terrorist assault attack suffered by our Embassy in Washington,” President Miguel Diaz-Canel pointed out before demanding the United States to guarantee the security of the Cuban diplomatic missions in that country.

Speaking at Non-Aligned Online Summit against Covid-19, the Head of State rejected serious military threats against Venezuela and expressed solidarity with Nicaragua.

Attempts to impose again the neocolonial past to Our America, publicly declaring the validity of the Monroe Doctrine, contravene the Latin American and Caribbean Proclamation as a Zone of Peace, the Cuban President underlined.

Diaz-Canel reported that in the current complex scenario the world lives in, the United States attacks multilateralism and unfairly disqualifies the role of international organizations, in particular the World Health Organization.