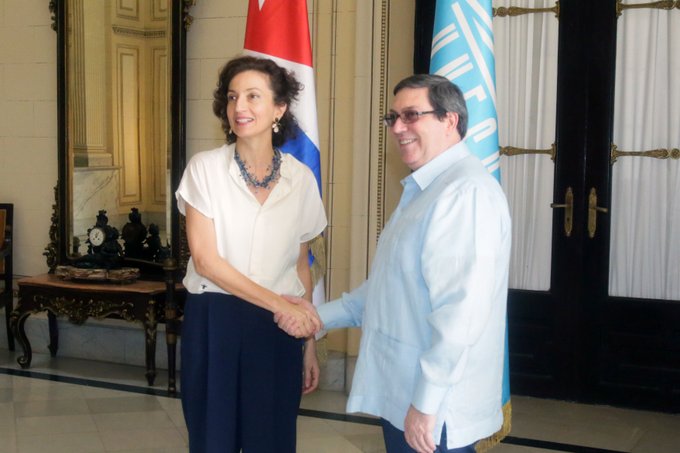 In the exchange, the distinguished visitor thanked the warm welcome on her first official visit to the island already in office, as well as Cuba’s support for multilateralism and especially for the organization she leads.

The Director-General of UNESCO highlighted the role of Cuba in the recent General Conference, where important decisions were made.

Cuba always supported us and we felt its presence in all the revitalization of UNESCO, Azoulay emphasized, and ensured that she was very happy on the island because of the partnership on culture and the contribution to mitigating vulnerability to climate change.

Chancellor Bruno Rodriguez highlighted the enormous priority Cuba attaches to its ties with UNESCO, and ratified the willingness to continue contributing permanently and constructively to the development of this organization, which is of extraordinary value for humanity.

In the meeting with the Director-General of that agency, Audrey Azoulay, Rodriguez stated that Cuba recognizes at UNESCO the best values of the international system and the multilateral world, and its enormous contribution to international peace.

The Foreign Minister highlighted the coincidence of the island with the purposes of the organization, with undisputed leadership in the implementation of the Sustainable Development goals.

The Chancellor appreciated UNESCO’s contribution to the UN Secretary-General’s report on the unfair blockade, and for the ongoing support for cooperation programs and projects.