From April 22 to May 12 there has been a decrease in electricity consumption compared to March, which has been made possible by cooler temperatures and a greater awareness of the importance of savings, the Minister of Energy and Mines, Livan Arronte said. 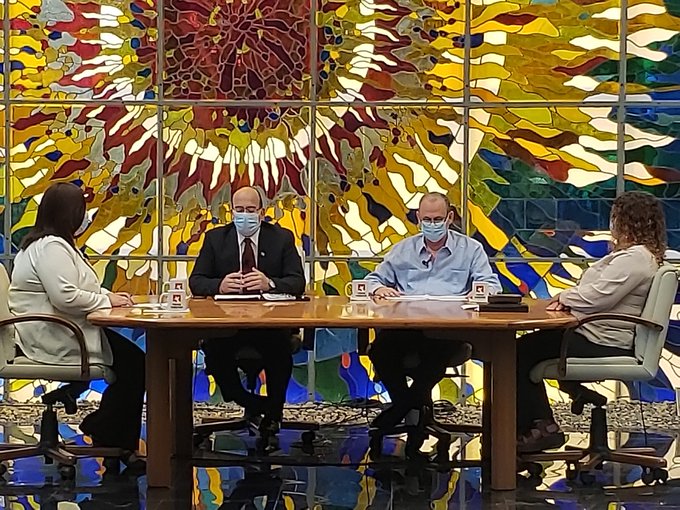 Electricity savings were the theme of the RoundTable. Photo: @PresidenciaCuba

HAVANA, Cuba.- From April 22 to May 12 there has been a decrease in electricity consumption compared to March, which has been made possible by cooler temperatures and a greater awareness of the importance of savings, the Minister of Energy and Mines, Livan Arronte said.

Speaking at the Roundtable TV program, he added that Cuba is making a great effort to ensure electricity generation, in a scenario marked by the upsurge in the blockade and U.S. maneuvers to prevent the arrival of fuel to the country.

Livan Arronte said electricity has performed stably and the disruptions that have occurred are not due to a generation deficit, but to some breakdown.

The Minister of Energy and Mines highlighted that a video conference with Energy councils to check consumption plans is held weekly.

Measures for Rational Use of Electricity

The Deputy Minister of Energy and Mines, Tatiana Amaran, reported at the Roundtable TV program on Energy councils and the analyses for the reduction of energy consumption, in the context of the fight against Covid-19 in Cuba.

Energy councils are constituted at the provincial and municipal levels and are chaired by coordinators, with the participation of experts from the Electric Company, members of mass organizations and trade union movements, Amaran said.

The Deputy Minister of Energy and Mines added that Deputy Prime Minister Ramiro Valdes chairs those meetings each week, that analyze the behavior of electricity demand, mainly in state services that are now the largest energy consumers.

Amaran said that among the proposed measures are the increase in efficiency and the abolition of any kind of waste.

Deputy Minister of Energy and Mines Tatiana Amaran explained that Energy councils have contributed to the reduction of electricity consumption with the implementation of measures such as shifting activities outside peak hours, self-monitoring of consumption in workplaces, and the creation of analysis groups.

The official said at the Roundtable on Friday that there are no planned blackouts, as the electrical system has the power to meet current demand.

However, Amaran pointed out that due to the still high energy consumption there have been several cases of breakdowns that, to be solved, require the disconnection of the electricity service.

The Deputy Minister of Energy and Mines also emphasized the payment of electricity service, which will continue to be postponed, although it can be done by alternative routes such as electronic platforms to avoid accumulation.

The Director-General of the Office for the Rational Use of Energy, Elaine Moreno, reported at the Roundtable on communication actions helping to reduce electricity consumption.

Moreno explained that a system of measures was designed to generate consumption habits linked to the rational use of energy, and added that even active research had been used to distribute savings messages to the population.

The official explained that social networks have been key to the dissemination of the campaign aimed at its rational use of energy, by disseminating advice on the use of household appliances, among others.

Moreno highlighted the effectiveness of the call to students´ patrols and the media campaign, which have marked a decline in electricity consumption.