At the closing ceremony of the 25th Sao Paulo Forum, held in Caracas since July 25, Cuban President Miguel Diaz-Canel Bermudez urged representatives of the world left to play a leading role in the current scenario in the face of the escalation of oligarchy and Washington´s threats to global peace. 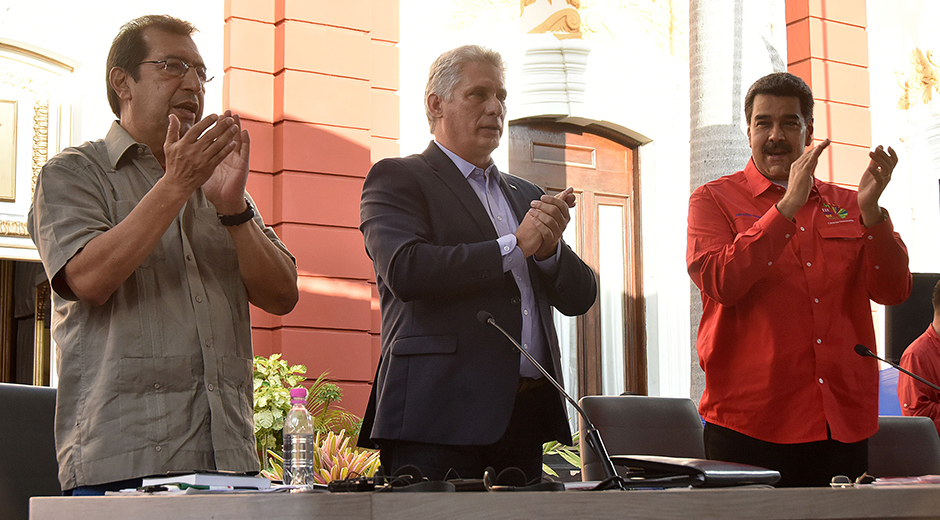 CARACAS, Venezuela. – At the closing ceremony of the 25th Sao Paulo Forum, held in Caracas since July 25, Cuban President Miguel Diaz-Canel Bermudez urged representatives of the world left to play a leading role in the current scenario in the face of the escalation of oligarchy and Washington´s threats to global peace.

We confirm to the world our support and solidarity with Nicolas Maduro and the civic-military union that has often defeated the enemy’s plans many times, the Cuban President highlighted.

Diaz-Canel said that Cubans will maintain support for Venezuelan resistance, as well as they denounce in all international scenarios the economic, political and media siege the Bolivarian nation lives.

Unity and integration were the great obsessions of Commanders Fidel Castro and Hugo Chavez, and they must be ours, insisted the Cuban President in the act held at Miraflores Palace, headquarters of the Executive.

In this regard, Diaz-Canel emphasized that Fidel was the first to recognize in the leader of the Bolivarian Revolution, Hugo Chavez, his qualities to defend Venezuela’s sovereignty, and to lead the country on the path of a fair society and with equitable social benefits for his people.

The Cuban head of State also assured that peace in Venezuela is equivalent to the defense of the entire region. He pointed out, it is to stop imperialist escalation against the peoples.

The Sao Paulo Forum calls us to condemn and demand the lifting of the blockade to Cuba, it also put us together to reject the scandalous acts of the empire against relatives of migrants, the Cuban President said.

He also pointed out, we are here to accompany the heroic Venezuelan resistance and demand an end to the brutal encirclement been imposed on it. Venezuela is today the first trench of the anti-imperialist struggle!

Diaz-Canel also demanded the release of Brazilian leader Luis Inacio Lula da Silva, a fact that he described as one of the great challenges for the left in the region. We must put an end to that abuse, he remarked.

On the other hand, Diaz-Canel praised the anti-imperialist and solidarity for peace march held this Saturday through the streets of Caracas, in which leaders and social activists of all five continents walked together with the legitimate representatives of the Venezuelan people in defense of the heroic Chavista process.

To support and defend Venezuela is to face decisively the return of the Monroe Doctrine and the imperialist escalation against our peoples, the President of the Caribbean island said.

He asserted the Forum is the best tribune to confirm that Cuba will not renounce, nor ever betray its principles nor Venezuela.

Cuba says No. imperialist lords, we do not understand each other, Diaz-Canel confirmed.