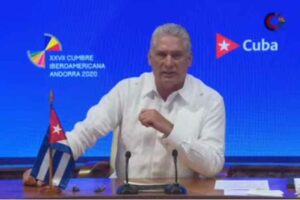 ndorra la Vieja, Andorra.- Cuba’s President Miguel Diaz-Canel, on Wednesday praised the management focused on science and innovation for sustainable development on speaking at the 27th Ibero-American Summit of Heads of State and Government.

During the virtual meeting, he explained that in his country, scientific activity is a key factor for progress and the fulfillment of the goals of social justice, a legacy of the historic leader of the Revolution, Fidel Castro.

According to the also first secretary of the Communist Party of Cuba, the nation has a robust and innovative scientific system and an advanced biotechnological and pharmaceutical industry, allied to the free and quality healthcare system, in addition to highly well-qualified human resources.

In that regard, he mentioned the 229 existing science, technology and innovation entities, of which 141 are research centers.

All the aforementioned, Diaz-Canel stated, allowed the nation fighting against the Covid-19 pandemic under the US economic, commercial and financial blockade’s impact, and counting on five vaccine candidates against Covid-19, two of which are in the 3rd phase of clinical trials.

The aim, the leader recalled, is to immunize the entire population before the end of 2021 with Cuba’s own drugs.

The national economic and social development plan until 2030 provides a leading role to scientific research, and the links between government structures and the knowledge and production sectors have been strengthened to boost progress, the president also pointed out.