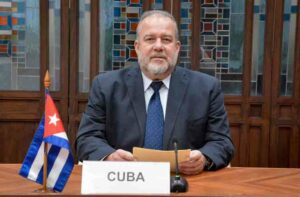 Moscow, Russia.- Cuban Prime Minister Manuel Marrero acknowledged the support received by the island from the governments of the Eurasian Economic Union (EEU) and reiterated the commitment to strengthen its insertion in that integration mechanism.

At the virtual meeting of the Eurasian Intergovernmental Council, based in the Russian city of Kazan, Marrero thanked the invitation to the event, attended by the chief executives of the member states.

The event is led by the Prime Minister of Kazakhstan, Askar Mamin, whose country currently chairs the EEU, and by his Russian counterpart, Mikhail Mishustin, in charge of the forum’s headquarters.

The Cuban head of state recalled that the island’s authorities had talked with the foreign ministers of the bloc member nations in recent months to exchange on the possibilities of increasing cooperation, both in the bloc and the bilateral level.

He stressed that Cuba attaches great importance to economic, commercial, financial, and cooperation relations with the UEE states.

Marrero drew attention to the possibilities of expanding and strengthening exchanges in areas such as trade, energy, transportation, tourism, the iron and steel industry, mining, health, pharmaceuticals, and biotechnology.