Cuba’s Foreign Minister Bruno Rodriguez Parrilla condemned the upsurge in U.S. hostile policy against his country at the ministerial meeting of the Non-Aligned Movement. 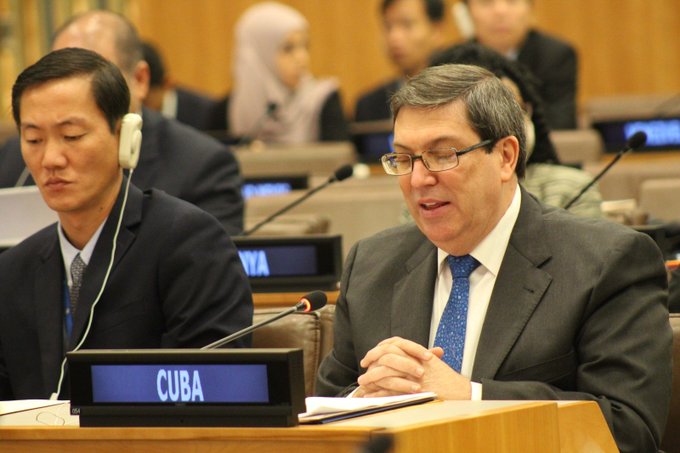 Cuban Chancellor criticized the blockade and proliferation of nuclear weapons.

Washington has strengthened its open hostility in its failed claim to destroy the Cuban Revolution, by asphyxiating our people, the Chancellor said at the meeting.

Bruno Rodriguez Parrilla explained that such actions include unconventional measures against the supply of fuel to the island, and the increase in the extraterritorial application of the economic, trade and financial blockade imposed by the White House on this Caribbean nation by almost 60 years.

This, he added, is an attack on international law, on the sovereignty of Cuba and also on that of all States, and is the main obstacle to the development of my country.

Cuba reiterated its readiness to work together with the international community to consolidate multilateralism, and to promote a world free of nuclear weapons, and thus safeguard the new generations of the scourge of war.

Speaking at the high-level meeting in UN to commemorate and promote the International Day for the Total Elimination of Nuclear Weapons, Rodriguez Parrilla highlighted that Cuba is part of the first Nuclear-Weapon-Free Zone created in Latin America and Caribbean.

The Minister said that the total elimination of nuclear weapons must be the highest priority in the field of disarmament, and remarked their possession cannot be justified under any concept or doctrine of security.

The Cuban Chancellor also said, we cannot allow petty interests to continue to put life at risk on Earth, nuclear weapons must be eliminated; it’s our responsibility.