Covid-19 vaccination in Cuba: a feat of humanity and solidarity

Covid-19 vaccination in Cuba: a feat of humanity and solidarity 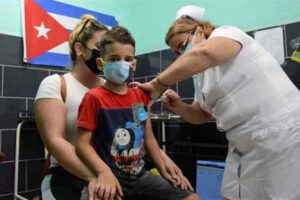 Havana, Cuba.- While Cuba boasts the vaccination of over 90 percent of its population against Covid-19, almost one billion people in low-income countries remain deprived of protection against SARS-CoV-2.

According to a recent statement by Director General of the World Health Organization (WHO), Tedros Adhanom, only 57 nations in the world have managed to immunize 70 percent of their population, most of them high-income countries.

He said that in some countries there is insufficient willingness to carry out immunization. This was affected by the initial lack of political commitment to equitable access to vaccines.

Adhanom also called on territories that reached 70 percent to provide support to those lagging behind, and urged vigilance and preparedness to reintroduce and adjust social and health measures as needed.

WHO executive noted that more than two years after the most severe health crisis in a century, the organization reported over six million deaths from Covid-19, but new estimates of excess mortality are higher: nearly 15 million.

While almost one billion people are waiting for a dose to protect them against Covid-19, Cuba made history with an immunization campaign that stands out for being massive and free.

Etiquetas: Covid-19 vaccination in Cuba: a feat of humanity and solidarity