Cuba and Russia: Principles in Tune

The chancellors of Russia, Sergey Lavrov, and of Cuba, Bruno Rodriguez Parrilla, confirmed in Havana the coincidence of political positions in defense of peace, international security and the role of multilateral organizations. 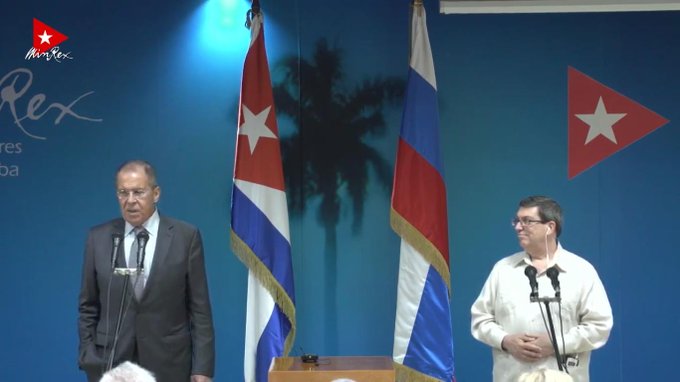 HAVANA, Cuba.- The chancellors of Russia, Sergey Lavrov, and of Cuba, Bruno Rodriguez Parrilla, confirmed in Havana the coincidence of political positions in defense of peace, international security and the role of multilateral organizations.

At a press conference, the Cuban Foreign Minister reaffirmed that bilateral ties are excellent and in full progress, following President Miguel Diaz-Canel’s visit to Russia last November and the next trip to Cuba by the head of the Russian government, Dimitri Medvedev.

The Cuban Chancellor stated that important bilateral cooperation projects advance in a sustained and satisfactory way in strategic sectors for Cuba, such as energy, industry and transport.

Chancellor Bruno Rodriguez said this Wednesday that Russia has a reliable, long-standing partner in Cuba, and added that we see Russian participation in our country’s economic development plans as a very important element.

The head of the Cuban diplomacy recognized Russia’s leadership in the defense and preservation of peace, in an international scenario marked by growing threats to international peace and security, the proliferation of unconventional wars, and the imposition of unilateral coercive measures.

Russian Foreign Minister Sergey Lavrov confirmed the interest in further developing bilateral relations in all areas, without exclusion, and recalled the historical significance of the date of July 26.

We will continue to strengthen solidarity in the face of U.S. actions against Cuba, such as the blockade that its people endure and even though it achieves new successes, the Russian Chancellor said.

Respect for International Law: There Is No Other Way

Chancellor Sergey Levrov announced that, on occasion of Havana’s 500th birthday and the celebration of St. Petersburg Day, in October the President of the Government of the Russian Federation, Dimitri Medvedev, and a large parliamentary delegation will travel to Cuba.

On Venezuela, Lavrov reiterated that in that one, and in any other country, conflicts must be solved only through peaceful methods, with a dialogue without imposition, based on respect for sovereignty and non-interference in internal affairs.

Lavrov thanked Cuba for its support for many resolutions presented by his country at the UN General Assembly, such as those opposing the glorification of Nazism and the militarization of outer space.

The Russian Chancellor defended his country’s right to maintain relations with Latin America and reaffirmed support for Cuba in its economic development.