The United Nations General Assembly adopted today the Cuban resolution against the blockade with 187 votes in favor, 2 abstentions and 3 against. 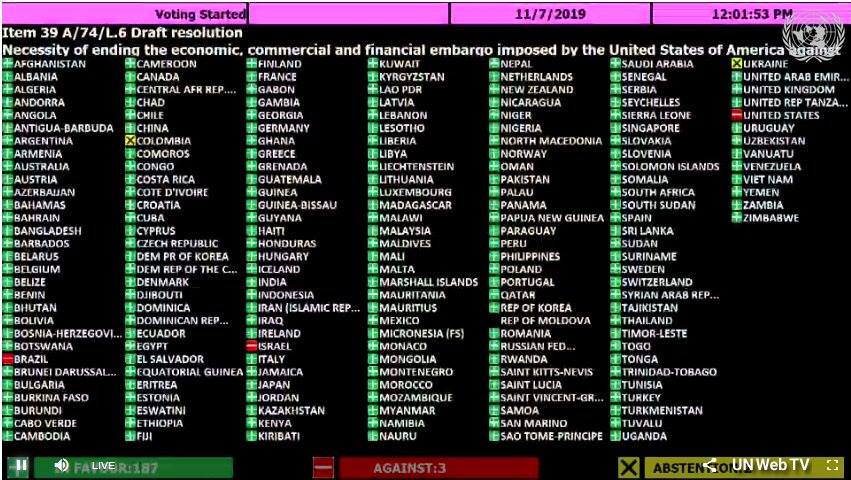 Cuba’s strong victory at the UN

UNITED NATIONS. New York.- The United Nations General Assembly adopted today the Cuban resolution against the blockade with 187 votes in favor, 2 abstentions and 3 against.

The United States, accompanied only by Israel and Bolsonaro´s Brazil, was again isolated by the “no” vote, as has happened almost systematically for 28 years.

Abstentions came from Ukraine and Colombia, although overall the figures were almost similar to those obtained in last year’s vote.

Although not binding, i.e. not mandatory, the re-rejection of the blockade is another political and ethical hard setback for the United States in the United Nations General Assembly, the most democratic body of that world institution that recognized the justness of the Cuban resistance to what can be regarded as a blatant genocide against the island.

The U.S. Government Is Responsible

Foreign Minister Bruno Rodriguez denounced at the United Nations the American government´s responsibility for the damage caused to the Cuban people by the severe implementation of the blockade for more than half a century.

The U.S. government is responsible, the Cuban Chancellor repeatedly highlighted by listing the measures taken by the Trump Administration that has launched an escalation in the aggression against Cuba.

Rodriguez stated that Washington does not hide its purpose of financially suffocating Cuba and of increasing damage, deficiencies and suffering of the Cuban people.

They have also set out to sabotage Cuba’s international cooperation in health, with a campaign of slander from politicians and officials attacking a program based on the genuine, world-renowned South-South collaboration conceptions, Bruno Rodriguez underlined.

The Cuban Foreign Minister noted the blockade causes incalculable humanitarian harm and is a flagrant violation of human rights that classifies as a genocide act in accordance with the Convention on the Prevention and Punishment of Genocide.

There is no Cuban family that does not suffer its consequences, the diplomat pointed out to list specific cases of Cubans of all ages whose health is at risk due to the inability to access medicines manufactured by American companies.

Rodriguez recalled that every year the United States delegation expresses with high doses of cynicism that his government supports the Cuban people, but, he asked, can someone believe such a claim?

Washington without Any Moral Authority

The United States government has no moral authority to criticize Cuba or anyone on human rights; we reject its repeated manipulation for political purposes, Chancellor Bruno Rodriguez Parrilla reaffirmed today at the UN General Assembly.

Referring to the American Ambassador’s speech, the Cuban Chancellor referred to several articles of the Universal Declaration of Human Rights with strong examples of how they are violated by the imperial power.

Rodriguez remembered the deaths of civilians by its troops at various latitudes; the killing of African-Americans by police and migrants by border patrols and the deaths of unaccompanied minors in immigration detention.

Impunity of the gun lobby is to blame for the increase in homicides in the United States, where multiple attacks occur with numerous fatalities, the Cuban Chancellor said.

In the United States there are 2 million 300 thousand people in deprivation of liberty, a quarter of the world’s criminal population, Chancellor Bruno Rodríguez recalled in denouncing the systematic violation of human rights in the empire.

The diplomat described as abhorrent the repression of immigrants, the separation of families, the indefinite detention and deportation of thousands of children and the maintenance of prisoners in a legal limbo in the prison at Guantanamo Base, a territory usurped to Cuba.

In the world’s richest country,” he said, 40 million people live in poverty; more than half a million sleep on the streets; there are nearly 7 million unemployed and 28 million people lack health insurance.

Bruno Rodriguez referred to how civil liberties are violated in the United States when it limits its citizens to travel to Cuba, the only forbidden destination for them.

In presenting Cuba’s draft resolution against the blockade at the United Nations, Chancellor Bruno Rodriguez referred to fines on groups of third countries, and how dozens of foreign banks were intimidated and disrupted their ties financial relations with the island.

On the illegal Helms Burton Act, he denounced its essence as the blaming claim to violate the Cuban nation’s right to self-determination and independence.

The blockade as a whole is a serious violation of international law, of the Charter of the United Nations, and of the postulates of the Proclamation of Latin America and the Caribbean as a Peace Zone, Bruno Rodriguez emphasized.

He said the damage accumulated by the siege in nearly six decades reached $922 billion, taking into account the dollar’s depreciation against the value of gold.

The blockade is an essential impediment to the aspirations of prosperity and well-being of several generations of Cubans, and continues to be the fundamental obstacle to the country’s economic development, the Foreign Affairs Minister, Bruno Rodriguez, said at the United Nations.

He remarked that for nearly six decades Cuba has fallen victim to the most unfair, severe and protracted sanctions system applied against any country.

It is the effectiveness of the Cuban socialist system, patriotism, revolutionary convictions, solidarity, consensus and unity of our people that, despite limitations, has allowed Cuba to overcome the serious challenges imposed, the diplomat said.

Bruno Rodriguez denounced the U.S. government intends to exercise imperialist domination in Our America, and invokes again the old and aggressive Monroe Doctrine.

No One Can Break the Dignity of a United People

Neither threats nor blackmail will take from us the slightest political concession, Chancellor Bruno Rodriguez reiterated in presenting at the United Nations the draft resolution on the blockade of the United States against the island.

After ratifying solidarity with Venezuela, he highlighted that, as Army General Raul Castro pointed out, despite its immense power imperialism does not have the capacity to break the dignity of a united people.

The Cuban Chancellor thanked the expressions of rejection of the blockade, and those who have always accompanied Cuba in its struggle for the cessation of the siege by Washington.

Rodriguez pointed out that as President Miguel Diaz-Canel affirmed, Cubans have intense and challenging days ahead of them, but no one is going to take away their confidence in the future that they owe their children, in the Fatherland their parents won for us standing.