The Ninth Plenary Session of the Central Committee of the Communist Party of Cuba, headed by Army General Raul Castro Ruz, analyzed the progress in the shaping of the National Plan of Economic and Social Development until 2030. It also discussed the current situation of the Cuban economy and the implementation of the Guidelines of the Social and Economic Policy of the Party and the Revolution in the period 2016-2021. 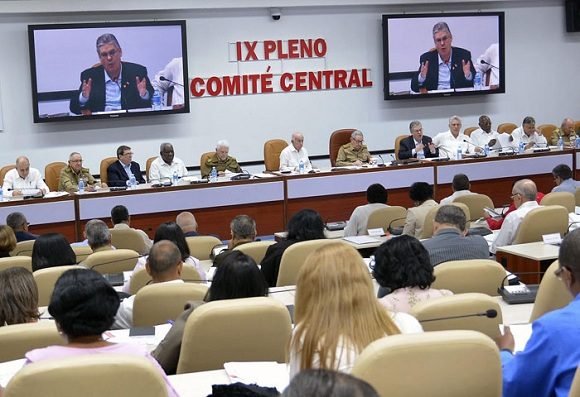 HAVANA, Cuba. – The Ninth Plenary Session of the Central Committee of the Communist Party of Cuba, headed by Army General Raul Castro Ruz, analyzed the progress in the shaping of the National Plan of Economic and Social Development until 2030. It also discussed the current situation of the Cuban economy and the implementation of the Guidelines of the Social and Economic Policy of the Party and the Revolution in the period 2016-2021.

The Minister of Economy and Planning, Alejandro Gil Fernandez, informed the members of the Central Committee that there is a progress in the elaboration of the National Plan for Economic and Social Development.  It considers. Three stages have been considered as a basis for the macroeconomics projection: 2019-2021, 2022-2026, and 2027- 2030. With this guiding document, the country has an instrument for planning in the short, medium and long term.

In this moment, the priority is focused on the first stage for which six strategic sectors are identified: tourism, biotechnology and pharmaceutical industry, electro energetics, food production, professional services abroad and construction.

In the case of infrastructure, Gil Fernandez pointed out that the National Development Plan should focus mainly on telecommunications and informatics, transport and logistics, as well as on water and sanitary networks.

In evaluating the behavior of the Cuban economy, the Minister of Economy and Planning pointed out that there are financial restrictions and inefficient fulfillment of the investor process. In addition, exports do not grow with the required dynamics, and foreign investment does not reach the levels economy demands.

This situation requires strengthening local development projects; advancing in the self-sufficiency of the territories, and prioritizing productive linkages with tourism activities and Mariel Special Zone of Development.

It is also necessary to incorporate to the Economy Plan all the investments they generate with their yields, a greater production of food, prospecting, extraction and production of oil, and the use of renewable sources of energies.

For 2020 and in line with the progress of the work of the National Economic and Social Development Plan, it is a priority the allocation of financial and material resources to the national industry. The purpose is to achieve the maximum use of existing capacities in the country and ensure production and services to meet the demands of the internal economy, especially in the production of food and medicines, transport, housing and computerization of society.

At this point in the meeting, Army General highlighted it is necessary to confront problems with the spirit of solving them always, to look for alternatives to difficulties in each territory and not to sit idly by. He recalled the revolutionary war and the constant confrontation with the hostile policy of the American Government, all moments in which Cuba has emerged victorious for not surrendering to problems.

As part of the agenda, Marino Murillo Jorge, head of the Permanent Commission for Implementation and Development, presented a report on the activities carried out during last year and the first months of 2019, depending on the implementation of the Guidelines during the period 2016-2021.

There are 47 policies adopted since March 2018 during the Fifth Plenary of the Central Committee that will evaluate this issue, which evidences the extensive process since then. Murillo Jorge emphasized in particular that the 13 policies related to science, innovation, technology and the environment are approved.

Among other topics, he referred to the improvement of the work of the Permanent Commission for Implementation and Development, the changes to the exercise of self-employment and the main transformations in the state business system with the aim of achieving the required autonomy and efficiency.

The President of the Councils of State and Ministers, Miguel Diaz-Canel Bermudez, noted that in the last eight years 206 policies have been approved, which demonstrates the intensity of work. Particularly during 2018, the Permanent Commission for Implementation and Development acquired more experience and organization, as well as a greater participation of the agencies of the Central Administration of the State.

In this regard, Diaz-Canel commented on the support the Government should give to the implementation of all policies, and insisted on linking jurists in the preparation of policies and legal norms supporting them, which makes it possible for work to more consistent.

The Cuban President insisted on the importance of defending as a principle that the politics of the Cuban Revolution is one, for both the state and non-state sectors. He also called to continue boosting the schedules so that the Guidelines are implemented in the shortest possible time.

Following the interventions of the first secretaries of the Party of several provinces, on their experiences related to the production of food, the agriculture and the construction of houses of work in the territories, Army General reiterated we are prepared to face any adversity, and highlighted the potential the country has to move forward.