President Miguel Diaz-Canel Bermudez began his speech at the central event for National Rebellion Day with an evocation to Fidel, remembering that it was precisely in Bayamo where he spoke for the last time in a commemoration of July 26. 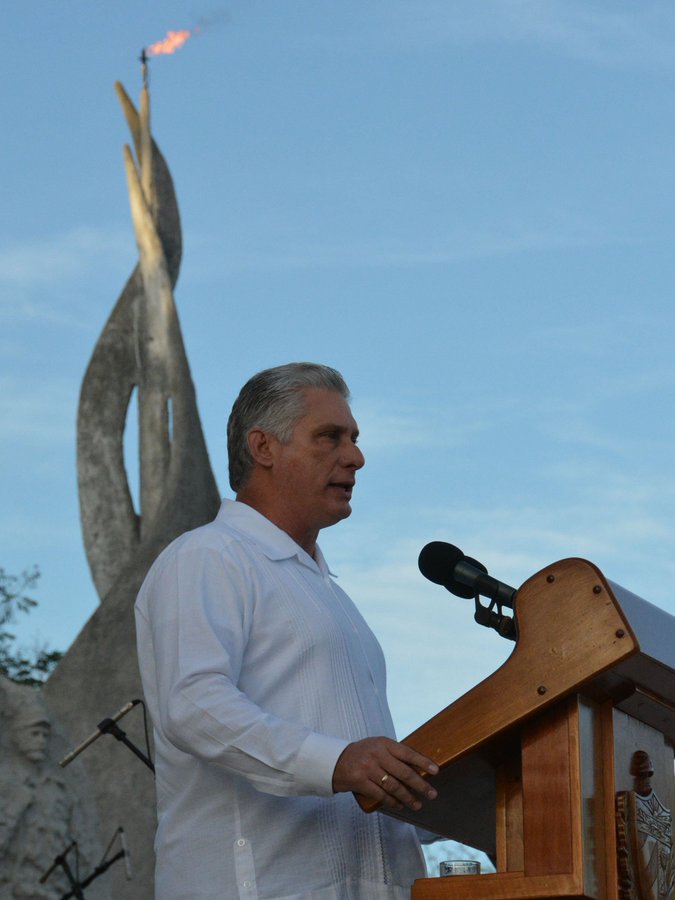 GRANMA, Cuba. – President Miguel Diaz-Canel Bermudez began his speech at the central event for National Rebellion Day with an evocation to Fidel, remembering that it was precisely in Bayamo where he spoke for the last time in a commemoration of July 26.

In the presence of the First Party Secretary, Army General Raul Castro Ruz, Diaz-Canel recalled how that tradition began 60 years ago, when thousands of peasants on horseback took Jose Marti Revolution Square and showed the most authentic face of a Revolution.

He recalled that since then, in the commemorations of this date, only Fidel, Raul, Ramiro and Machado Ventura had given speeches.

Diaz-Canel described as relevant that the protagonists of history alive, lucid and active in their political leadership have entrusted to the new generation of leaders the central words in today’s event.

The Huge Weight of History

In one of the most momentous commemorations in revolutionary history, I speak on behalf of the grateful ones who accept the challenge of pushing a country aware of the extraordinary inherited history and the commitment of not to fail the heroes of the Fatherland or the people we were born in, Miguel Diaz-Canel said.

To Raul, to Ramiro and to all the assailants who are with us, thanks for the trust, for the example and for the legacy, the President of the Councils of State and Ministers said with emotion at the event in the Homeland Square of Bayamo.

What a very huge weight history has in our lives!, Diaz-Canel said and mentioned endearing places for anyone who feels Cuban, such as La Demajagua, Yara, Dos Rios.

The Cuban President asked: Who can cross the Cauto, climb the hills of the Sierra Maestra or get his feet wet in Playa Las Coloradas without shuddering with respect and cult of heroism?

From setback to victory

Fidel, Raul, Almeida, Ramiro were brothers and those men who thought of the country as a family. From them we come and it is very important that our homage is not in a ceremony or an ephemeris, Diaz-Canel highlighted

The President called for strengthening spirituality, civics, decency, social discipline, and a sense of public service, because, he said, no progress would be lasting if the social body breaks down morally.

After recalling that the actions of July 26 did not achieve the goal, he pointed out that despite the grief, the survivors of that epic never regretted it, but created a movement with a liberating program that retains full force.

The small engine ignited the big one and five years, five months and five days later, the triumph of 1959 would arrive. The setback had become a victory, Diaz-Canel underlined in the act dedicated to July 26.

Achievements of the Victorious Revolution

Later in his speech, he emphasized that before 1959 Cuba was the fiefdom of American companies, in collusion with corrupt politicians and under the umbrella of military forces under dictator Fulgencio Batista.

Diaz-Canel remarked that the Agrarian Reform Law was the first major nationalization and the greatest act of social justice, demanded by the people, and it was the breaking point, the Rubicon crossing, as Army General Raul Castro said.

The President also referred to nationalizations, a right that international legality recognizes to all sovereign countries based on the public good.

In Defense of the Built Work

Those who believed themselves to own Cuba, reluctant at losing it, unleashed an undeclared war that has lived brief pauses, but has never ended, President Miguel Diaz-Canel said at the act for July 26 in Granma province.

The head of the Cuban State said that the Helms Burton Act was elaborated to confuse and give that confrontation a legality it does not have. He added that it is a legal spawn where the imperial labors of dominance and revanchism of those yearning for Batista government.

The descendants of that peasant and Mambisa cavalry, who took the Square to greet the victorious Revolution, inherited the land and machetes from their ancestors and they would not hesitate to brandish them sharply against those attempting to snatch the land the Revolution handed them over, Diaz-Canel warned.

The Cuban President reiterated that we will never understand those who intend to take Cuba to the prevailing situation before the revolutionary triumph.

President Diaz-Canel stated that from March 2018 to last April, the blockade caused losses of more than $4.3 billion, without quantifying the impacts of the latest measures of the Trump Administration directly affecting tourism and associated with the growing non-state sector.

After six decades of harassment, cumulative losses amount to more than 922 billion, considering the dollar’s depreciation against gold, he added.

Diaz-Canel said the siege is closing more and more over the island and denounced that the US Administration has begun to act more aggressively to prevent the arrival of oil in Cuba.

The heroic Cuban family is able to resist the siege with dignity and continue to love even in the distance, because nothing and no one can divide it, the President pointed out.

We Don’t Understand Each Other

Diaz-Canel said the US government publicly declares funds for subversion and invents false pretexts to incorporate Cuba into spurious lists to justify the blockade.

They propose us to negotiate reconciliation in exchange for abandoning the course chosen by the people. We are suggested to abandon friends, but no, imperialist lords, we do not understand each other, the President emphasized before reiterating that Cuba is willing to negotiate on the basis of peer-to-peer respect.

Diaz-Canel noted that we will not be distracted by pressure and threats and will continue to work for the economic and military invulnerability of the country and the legal reordering, among other tasks, but with the premise that to imperialism nor a less chance, as Che Guevara said.

The President said Cuba will take these messages to the Sao Paulo Forum to strengthen the unity of the left forces.

What we have found in this province, and which we appreciate in the speech of the First Secretary of the Party, Federico Hernandez, are important economic and social results for which Granma deserved to be the venue of the celebration of July 26, the Cuban President highlighted.

However, Diaz-Canel pointed out that the territory’s own authorities recognize that even the productive results are far from their potential.

After calling to take care of costly investments in transportation, industry, communications, and other areas, the President noted that the government and citizens must prevent all that be mistreated, or neglected.

Diaz-Canel added that a level of response is evident, but it is not enough because circumstances force a higher rate of progress towards our goals.

Every Day a New Moncada

President Diaz-Canel said in Granma that to sustain as many high social benefit measures as possible, such as the recent wage increase to the budgeted sector, it is necessary to produce more and improve the quality of services.

We are going for more is not a slogan, but the answer to those who want to rob us. We do not understand each other is the realization in practice of the will of not to let ourselves be bended by threats, the President highlighted at the act Raul attended.

Diaz-Canel recalled that July 26 will always be a great aspiration and called, thinking as a country, to return to the slogan that we all work of making every day a 26, every month a July and of each commitment a victorious Monaca.

The world will see what we are capable of doing and the world will accompany us in our resistance. It is time to make a new and urgent call to its conscience, Diaz-Canel emphasized.