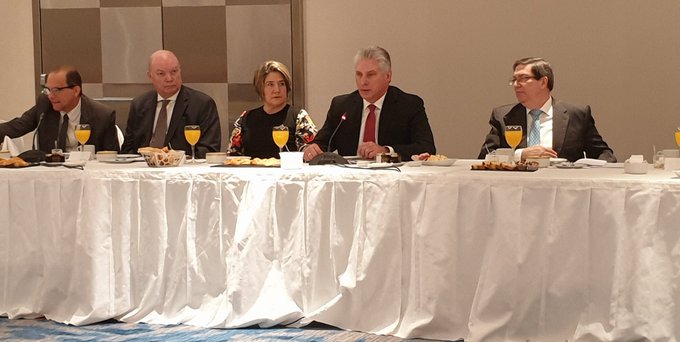 BUENOS AIRES, Argentina. – The President of Cuba, Miguel Diaz-Canel, began this Monday his program of visit to Argentina with a working meeting with entrepreneurs whom he thanked for his support in the face of the U.S. blockade against the island.

In his first activity at the beginning of his stay in the South American nation, Diaz-Canel exchanged with Argentine entrepreneurs who maintain a positive flow of trade with Cuba, which places Argentina as the fourth trading partner of the island on the continent and second issuer of tourists.

The Cuban President arrived last Sunday in Buenos Aires to attend the investiture ceremony of the new Argentine government headed by Alberto Fernandez and Cristina Fernandez, who will assume the reins of the nation next December 10 after having triumphed in the elections in front of Mauricio Macri´s neoliberal proposal.

Cuba and Argentina have maintained an economic and commercial relationship for years, which is intended to revitalize from the visit made to that nation by the Cuban Head of State.