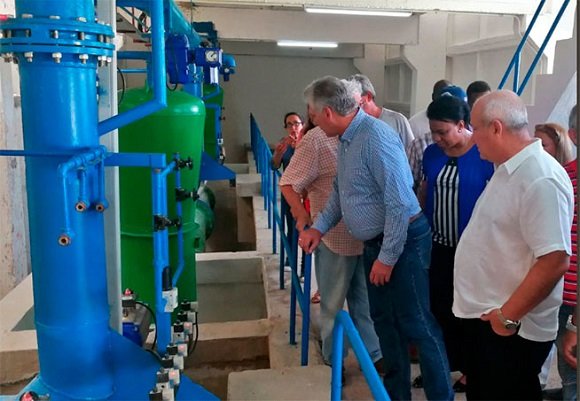 CAMAGUEY, Cuba.- To know the integral rehabilitation of the aqueduct of Camaguey, the third most populated city of the country, Cuban President Miguel Diaz-Canel Bermudez visited the water purification plant in his second day of work as part of a Government visit to the province.

Accompanied by Vice President Ines Maria Chapman, the President exchanged with specialists on the investment program financed by the Saudi Arabia Fund for Development, with 40 million of dollars in a first stage, started in 2016 and planned to conclude in 2021, which is already at about 80 percent execution.

With more than 100 years of operation, at the triumph of the Revolution the Camaguey Aqueduct had a single dam of just seven million cubic meters of capacity.

The hydraulic development promoted by the leader of the Revolution, Fidel Castro, allowed the more than 320,000 inhabitants of Camaguey city receive water from four reservoirs, among them Maximo and Cuban-Bulgarian Friendship dams.

Camaguey also has a purification system, currently in a process of rehabilitation. It will allow increasing the supply to the city. Now they are working to reach areas of the West periphery with a net of drivers to replace the oldest ones.