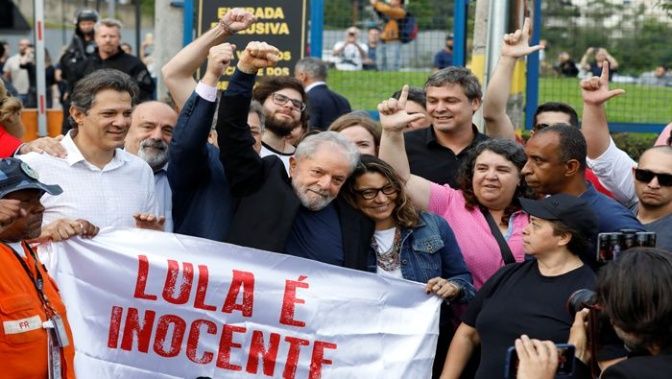 BRAZILIA, Brazil.- Former Brazilian President Luiz Inacio Lula da Silva was released today after serving 580 days in political prison in the Superintendence of the Federal Police of Curitiba, capital of the southern state of Parana.

Under chants of Lula free and flags of different political tendencies and social movements, the politician received the warm greeting of thousands of people, very excited with his release.

Since early this Friday there was a large concentration of people in front of the police headquarters in Curitiba, awaiting the departure of the founder of the Workers’ Party, Luiz Inacio Lula da Silva.

On Friday, the defense of the former worker leader brought to justice the request for freedom in the light of the decision taken the eve of the Supreme Federal Court, which deemed the prison unconstitutional after the conviction in second instance.

After Getting Out of Jail, Lula Wants to Take Care of Brazil

Former President Luiz Inacio Lula da Silva, who was released after serving 580 days in political prison, wants to take care of Brazil and build a country project for all Brazilians.

This Friday, the defense of the former workers’ leader brought the request for freedom to justice, taking into account the decision taken the day before by the Supreme Federal Court, which deemed the prison unconstitutional after the conviction in second instance.

Workers’ Party Chair Gleisi Hoffmann said that after his release, Lula wishes to thank the Lula Vigil, to hug and thank the people who have been there for 580 days without leaving him alone.

After the meeting with the Vigil, Lula will continue to Sao Paulo, where he began his political struggle: Later he will re-enter his public life in the Metallurgical Syndicate, Hoffmann explained.