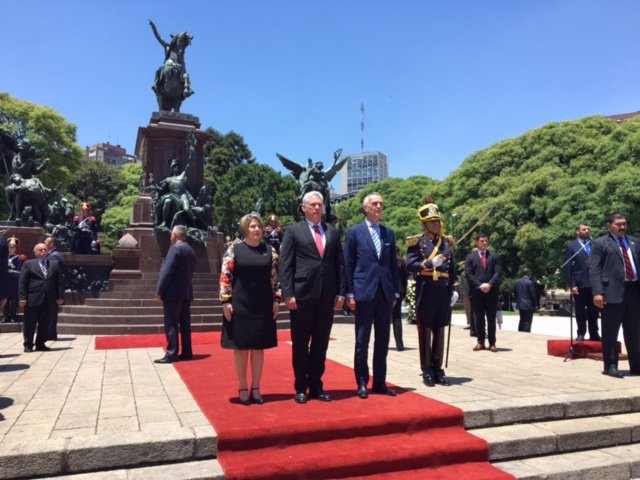 BUENOS AIRES, Argentina. – The President of Cuba, Miguel Diaz-Canel, heads the delegation of the island attending this Tuesday the inauguration of Alberto Fernandez as President of Argentina and Cristina Fernandez as Vice-President.

On Monday, the Cuban Head of State held an exchange with Argentine entrepreneurs whom he thanked for his constancy in sustaining trade relations with Cuba despite the pressures from the U.S. blockade.

At another time, Diaz-Canel met with intellectuals and personalities of Argentine culture and met Cuba´s friends of long standing, such as the newly appointed Minister of Culture, Tristan Bauer, and Nobel Peace Prize Adolfo Perez Esquivel.

The Cuban President advocated for producing ideas that open paths to justice and unity of peoples, looking after to safeguard culture in such difficult times.

The Cuban delegation visiting Argentina, headed by Miguel Diaz-Canel, placed this Monday a floral offering to the Monument of General San Martin, one of the most prominent personalities of the war of Latin American emancipation.

Later, in Memory Park, the Cuban President placed a flower on the commemorative plaque remembering the two Cuban diplomats missing during Argentina’s military dictatorship, and the Cuban delegation threw flowers into the river in tribute to the victims of state terrorism.

At another time an event was held to reaffirm the friendship between the two countries, where Eugenia Mendez, a member of the Movement of Solidarity with Cuba, evoked Fidel Castro’s Latin American dimension.

For his part Diaz-Canel, through an exalting and courageous speech, made it clear that there is no strength in this world that can separate Cuba and Argentina.